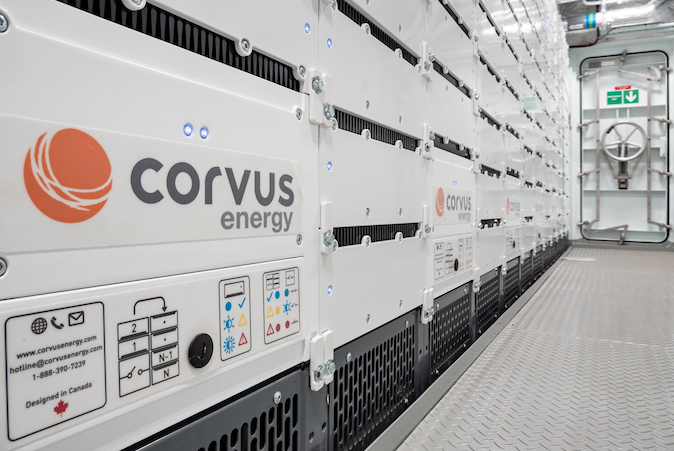 Photo: Espen Mills/Hurtigruten. The battery room on the MS Roald Amundsen
Specially designed for exploring some of the most spectacular and sensitive oceans on our planet, in addition to hybrid propulsion, the MS Roald Amundsen boasts a level-6 ice-class hull. That’s the highest passenger ship rating, and allows the ship to safely sail its 500 guests to all the seven seas, including polar oceans.
In a highly symbolic moment, the ship also became the first ship to be christened in Antarctica. Rather than the traditional bottle of champagne, and following the example of explorer Roald Amundsen himself when christening his famed expedition ship in 1917, a chunk of ice was crushed against the bow.
It was not only recognition of the ship’s polar destiny, it was also intended to pay symbolic respect to the ocean environment and Hurtigruten’s commitment to the preservation of the seas and the lands and people bordering them.
Hurtigruten has long been a trend-setter in responsible travel: in addition to the world's first hybrid electric-powered cruise ships (the MS Roald Amundsen is being joined by 2 more new hybrid ships in the next couple of years) the company is converting 9 existing ships to hybrid, participates in research projects and is pushing for a ban on heavy fuel oil and stronger regulations in untouched natural destinations, led the cruise industry in banning single-use plastic fleet-wide, and funds local and global green projects through its foundation. 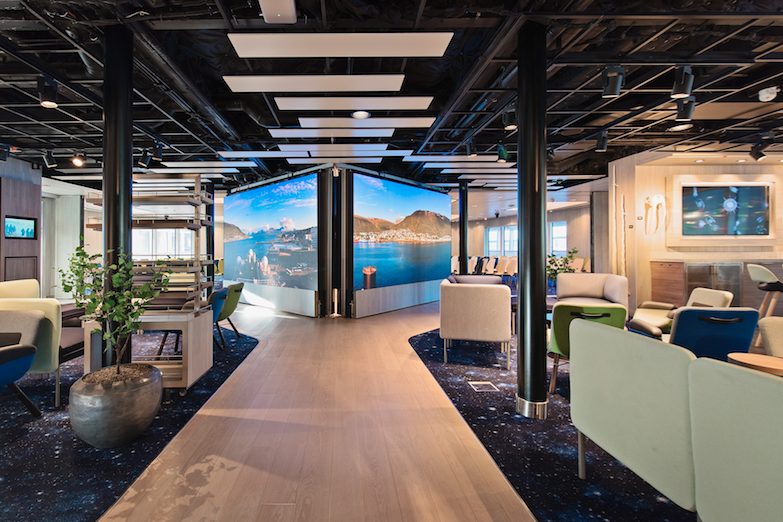 Photo: Agurtxane Concellon/Hurtigruten. The Science Center on MS Roald Amundsen
The stunning scenery of the MS Roald Amundsen’s expedition destinations is the backdrop for the ship’s sleek, modern Scandinavian design. Guests’ onboard experience include a high-tech Science Center, observation decks, an infinity pool, panoramic sauna, gym and Wellness Center, three restaurants, bars, Explorer Lounge, aft-facing suites with private outdoor hot tubs, and the informal atmosphere Hurtigruten is known for.
Following her world’s first Antarctic christening, the ship made expedition cruises along the fjords of the Norwegian coast, Greenland, and then became the first hybrid-electric ship to cross the legendary Northwest Passage across the top of Canada, 3000 nautical miles from the Atlantic to the Pacific, following in the wake of the ship’s namesake explorer. 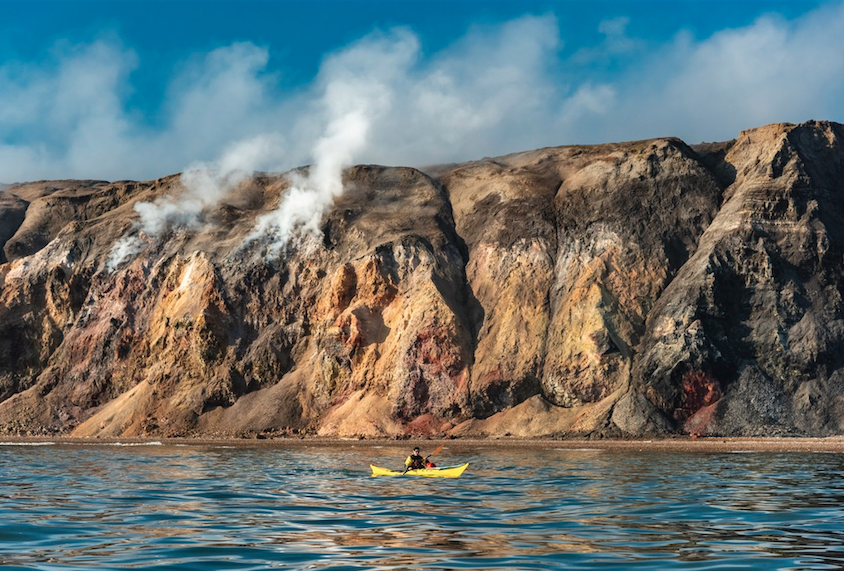 Photo: Karsten Bidstrup / Hurtigruten. Kayaking off the MS Roald Amundsen in the Northwest Passage
Itineraries also include eco-friendly expedition cruises into remote, less-traveled corners of the coasts of North and South America en route between polar sailings.
The ship is not the only hybrid-powered element of Hurtigruten’s expeditions; it continues once you disembark the ship to explore. The company also announced partnerships providing it with silent, electric-powered, emission-free explorer catamarans and snowmobiles. Imagine silent, nighttime snowmobile trips under the Northern Lights!
Continued innovation is a key part of Hurtigruten’s commitment to preserving the maritime environments it passes through. With the launch of the ground (ice?) breaking MS Roald Amundsen, the company aims to set a new standard for cruising and the entire shipping industry.

Top photo: Karsten Bidstrup / Hurtigruten
MS Roald Amundsen under the Northern Lights, sailing through the Northwest Passage. You can see the Captain on the Bridge.
Copyright BestTrip.TV/Influence Entertainment Group Inc or Rights Holder. All rights reserved. You are welcome to share this material from this page, but it may not be published, broadcast, rewritten or redistributed.

What's a Travel Bubble? Plus 3 Tips For Making the Most of Yours

You might see this view sooner than you think.The world of travel has begun to re-open. But it’s not like the ta... learn more

Let Us Help You